The perplexity concerning the European standards RoHS and WEEE published on February 13th, 2003 is constantly growing. Whereas in the first instance the focus was on producers of semiconductor components and electronic circuits and their changing over to lead-free assembly and soldering technologies, the cable manufacturers mostly remained unconcerned. However, the European standards RoHS Directive EU-2002/95/EG and the rules of WEEE EU-2002/96/EG are also valid for cable manufacturers. In other words: beginning July 1rst, 2006 all cables which do not fulfill the RoHS must not be sold anymore. This also applies for all stocks of OEMs, EMSs and intermediaries. Nevertheless, many companies underestimate the engineering process and procurement-related logistic efforts involved in the changeover, which nearly lasts 6 months until the the new RoHS are implemented. 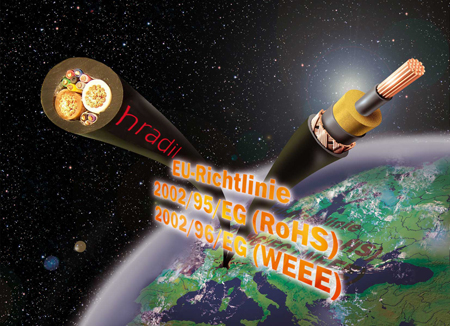 Beginning with July 1rst, 2006 the use of „certain hazardous substances“ in new electrical and electronic equipment is restricted. Two European environment directives build the framework for these European environmental goals: The RoHS Directive EU-2002/95/EG (Restriction of the use of certain Hazardous Substances in Electrical and Electronic Equipment) and the WEEE EU-2002/96/EG (Waste Electric and Electronic Equipment). In Germany, these European directives were implemented in the Elektro- und Elektronikgerätegesetz (ElektroG) dated March 16th, 2005. The §5 of the ElektroG lists substance restrictions for defined categories and equipment mentioned in the enclosed annex I. Switzerland plans the implementation of these European directives in the ChemRRV (Chemikalien-Risikoreduktions-Verordnung).

One often wrongly assumes that the RoHS standards only relate to the processing of lead. Alfred Hradil, managing owner of Hradil Spezialkabel, explains: “Lead is only one of many substances that the RoHS prohibit. Though the notion “leadfree” is commonly used in our sector, it does not mean that the sole replacement of lead guarantees the fulfillment of the RoHS”. Which substances are then concerned by the RoHS? The RoHS prohibits the “distribution” of components and products containing lead, mercury, cadmium, hexavalent chromium, polybrominated biphenyls (PBB) or polybrominated diphenyl ethers (PBDE). The WEEE’s purpose on the other hand is the reprocessing, sorting and processing of products which do not comply with the RoHS standards.

For many cable producers, the flame-retardance property constitutes the biggest obstacle to the compliance of the RoHS standards since the commonly used brominated flame retardants are banned. In order to fulfill the RoHS requirements and at the same time to ensure the flame resistance, Hradil relies on halogen-free and non-inflammable plastic materials. These are foremost cross-linked elastomers, thermoplastics and thermoplastic elastomers with flame-retardant additives based on phosphorus, nitrogen, metal hydroxide or boron. Says manager Alfred Hradil: “We have refrained from using harmful lead and bromine in our cable since many years. Additionally, most our cables are free of cadmium.”

Many of the above mentioned “new materials” are “good old favorites”. But precisely by combining them and by making advantage of their specific focuses, we can respond to the intended purpose and obtain their full performance for our special cables. We design new cables which not only fulfill the RoHS but also meet the ambitious demands of all industrial customers.