Every day, 8,000 girls are subjected to genital mutilation and the loss of their dignity. That’s one girl every eleven seconds, with more than 150 million women affected worldwide. TARGET aims to put a stop to this criminal practice.

Founded by Rüdiger Nehberg in 2000, TARGET is a human rights organisation whose primary task consists in taking local action to combat female genital mutilation in the places where it occurs. TARGET operates a mobile hospital in Afar in Ethiopia and has initiated a project for unemployed seamstresses in Mauritania. It also runs a health centre to support the indigenous Waiapí population in the Brazilian rainforest.

As female genital mutilation is wrongly justified by references to holy texts and religious duty and the majority of victims are Muslim women and girls, TARGET sees the strength of Islam as the best opportunity to put an end to this practice. TARGET’s “Pro-Islamic Alliance against Female Genital Mutilation” aims to make clear that the custom, wherever it is observed, is incompatible with the Qur’an and the ethics of Islam, and that it discriminates against Islam, is a presumption in God’s name and a sin. Leading Islamic authorities have joined this alliance. TARGET’s vision is to bring the Azhar decision to mosques throughout the world and ultimately to have a ban against female genital mutilation proclaimed in Mecca. For the wellbeing of women. In honour of Islam. In praise of Allah.

TARGET is supported by a highly qualified advisory board comprising representatives of Al-Azhar University in Cairo, Islamic authorities in Africa, the Central Council of Muslims in Germany, the German Federal Foreign Office and the German embassies, as well as Prof. Dr. Udo Steinbach, former director of the German Orient Institute Hamburg and current director of the GIGA Institute of Middle East Studies, and physicians. 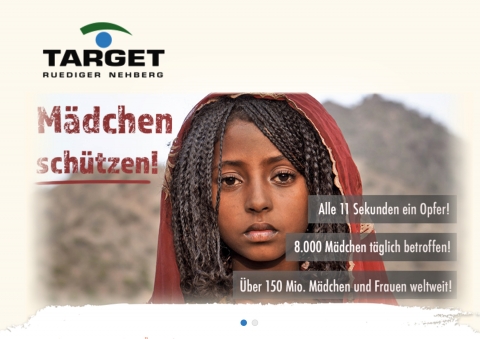